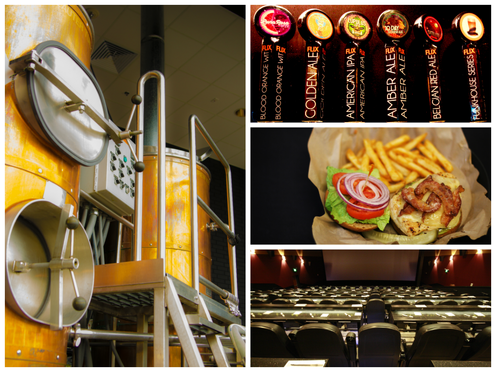 Flix Brewhouse, based in Round Rock, Texas, is growing. Flix is not your average theater. It is the creation of restauranteurs bringing new perspectives to the movie business. A best of breed cinema-eatery-microbrewery concept built for the 21st century, Flix exhibits first run blockbuster movies (including 3-D) while serving you fresh, delicious food and craft beer brewed in-house. We are America's Cinema Brewery — the ONLY first-run movie theatre in the world to incorporate a fully functioning microbrewery. By combining these concepts, Flix delivers to your theater seat three of America's great loves — craft beer, great food, and the latest movies! Our stadium seating "dining rooms" are outfitted with the latest high-def digital projection and sound technologies, wall-to-wall curved screens and feature our revolutionary Easy Glider moveable table tops. We brew up to 12 of our own beers on-premises and offer up to 30 other regional craft beers on tap for guests to enjoy, as well as a variety of wines and ciders. We will also offer a full bar in certain locations. Flix is open seven days a week to the public and you don't need a ticket to come in and grab a bite to eat or have a locally brewed beer anytime you want.